As a matter of fact, 1402 University (along with 261 buildings and five structures in the East Campus Neighborhood Historic District) was added to the National Register of Historic Places on Feb. 16, 1996 – exactly six months before Breeze’s show. The house sits four houses east of Kappa Alpha to the northwest and Delta Chi to the southwest. More importantly, it’s 500 feet east of College and University (the northeast corner of campus) and a brisk eight-to-nine minute walk from downtown.

University Avenue has been a sensational walking street for the past 150 years, as long as you’re wearing shoes. If you’re barefoot, you’ll get your feet carved up by the spiky gumball fruit of the street’s renowned sweet gum trees or patches of the street’s original brick. The neighborhood’s charming and convenient location, as well as Columbia’s housing shortage in the early 1900s, accounts for East Campus’s rapid development between 1910 and World War II. During that time, the neighborhood was known as “the place where all the outstanding families in town picked a lot and then built their dream home,” according to the 1995 National Register of Historic Places Registration Form.

“Outstanding” was a suitable way of describing George D. Parks, the Indiana-born owner of Parks’ department store at 716 E. Broadway, and Bess (Bessie) Parks, his Arkansas-born wife. The couple married on June 6, 1899 in Arkansas and were well-established in Columbia’s growing merchant class when they built 1402 University in 1924. They paid roughly $20,000 for the single-family, brick veneer, foursquare home, one of 65 foursquare homes within the historic district’s 262-home boundary. Like most of its foursquare counterparts in the neighborhood, the house is two stories tall and cubic. Unlike most of the others, the home has a single-story ell on its eastern side. Mostly unstyled and unassuming, the home does have one notable decorative element: two Tuscan columns supporting the front entrance. If you blink from a distance, they vaguely call to mind the quad’s famous Ionic columns.

The Parks were one of the first East Campus families to own a radio, according to the 1930 U.S. Census. Their son, George Jr. (George R.), was 10 when the family moved in. He was Hickman’s sophomore class president during the 1928-1929 school year, then went to Mizzou, where he took a keen interest in horses and excelled in polo. As a senior he was the president of the Timber Toppers, a three-year-old student group that was “especially interested in various branches of mounted activities, such as polo, jumping, and training and schooling of remounts,” according to the 1934 Savitar yearbook.

George Sr. died on Dec. 3, 1938, and Bess and George Jr. still lived at 1402 University in 1940, according to that year’s Census. George Jr. enlisted in the U.S. Army during World War II and quickly rose to lieutenant colonel of the 156th Field Artillery Battalion, one of the oldest military units in the United States (its original battery was formed in 1658). In the summer of 1944, George Jr. led the 156th through its final training at Camp Phillips in Kansas. Shortly thereafter, the 156th helped push the Germans out of France, according to the “156th Field Artillery Battalion, Unit History” accessed through the Bangor (Maine) Public Library’s Digital Commons. On Feb. 15, 1945, five days after the ground had thawed, the Seventh Army ordered a “limited attack to straighten out its lines and gain high ground in preparation for the final spring offensive” of the war. The battalion drove 4.1 km east through heavy mud from Gros-Rederching to Guising, pushing the Germans against their own border just 8 km away. George Jr. earned the Bronze Star for his efforts on Feb. 18.

After the war, George Jr. returned to Columbia and Parks’, but not 1402 University. During the so-called “baby boom,” when Columbia families did all their shopping downtown in an eight-block area, Parks’ was known for its “large children’s department,” according to Warren Dalton’s Oct. 6, 2013, column in the Daily Tribune. George Jr. remained in town until his death in December 1978. 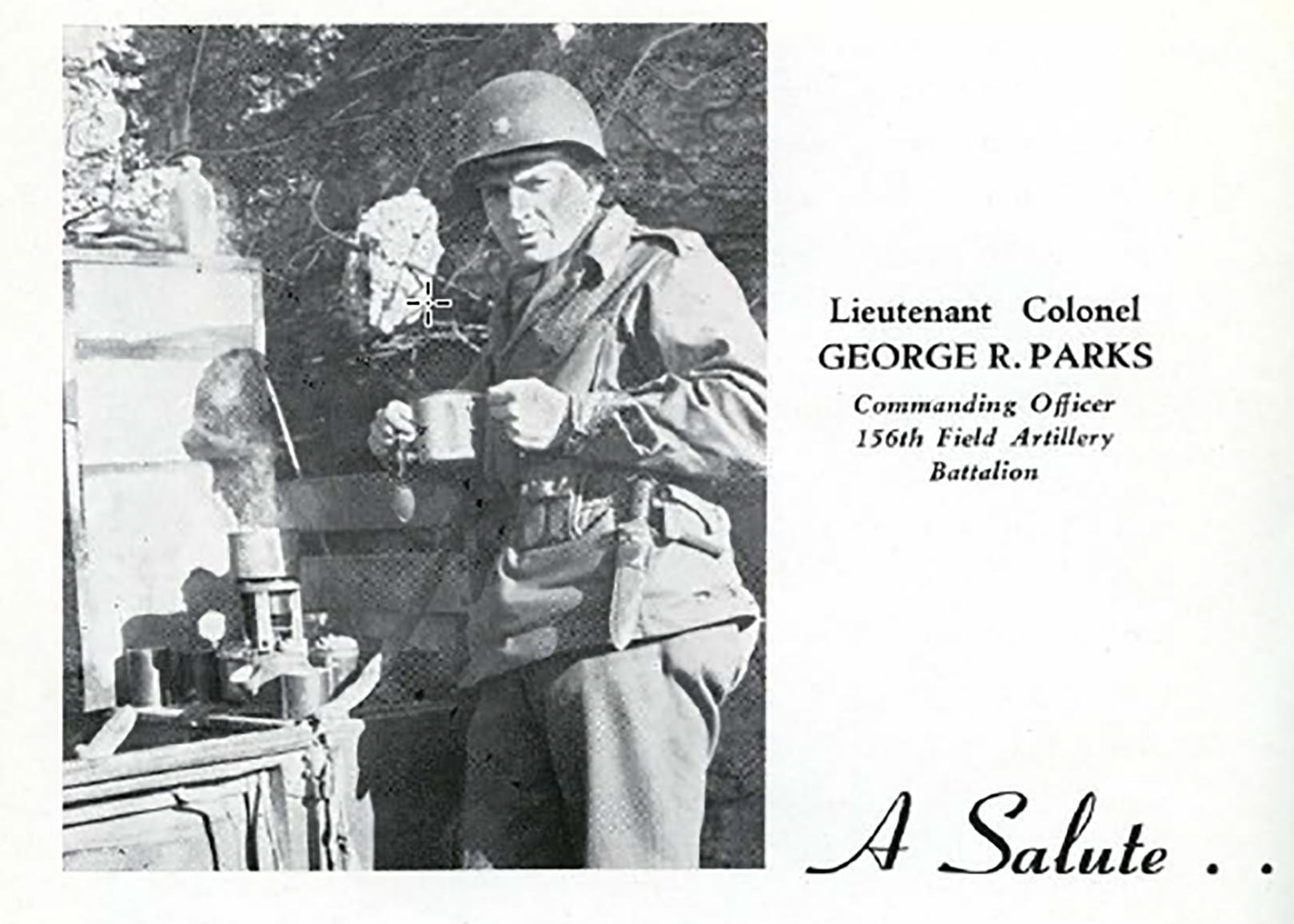